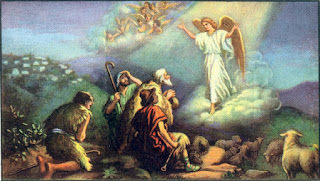 Be still, dear friends, think back the day
When angels sang to shepherds cold,
And starry night lit up their way,
As God's great Love did them enfold.

And in the stable they did see
Our Saviour just as they'd been told.
With "Peace on earth" eternally
Our God's great Love did them enfold.

Dear brethren, God's dear Love was planned
To reach all hearts, to make all gold.
This Christmas take your neighbour's hand:
Let God's great Love you all enfold.
And when your heart is full of Love
It radiates through all you are:
And shining thus it seems thereof
That God has fashioned one more  star!

From the unrestricted freedom of the open air,
The bumble bee flew unwittingly into our conservatory.
Within seconds it had bumped and buzzed against an invisible window,
And it repeated its actions in bewildered puzzlement.
Again and again, in futile frustration, the bumping and buzzing reverberated.
It just didn't know what was preventing it flying forwards.
So it buzzed and bumped in blind repetition, for that was all it could conceive.
Ever more tired and confused, its efforts became more sporadic.
It fell onto the sill, near to giving up,
Gathering strength for a final fling of desperate helpless hope.

It didn't know that its plight had already been heard:
Two kindly hands with glass tumbler and stiff card were on their way.
Sudden entrapment caught the bumble unawares.
In furious fear and tight enclosure,  its bewilderment was complete,
It buzzed ferociously, loudly, fighting in utter ignorance of what was happening:
But by the open patio door, released and now unfettered, it flew, flew skywards!
Zigzagging in the unexpected joy and relief of freedom,
Not knowing how, but wonderfully, gloriously, free.
Free to be itself.

It made me think.
How often do I keep bumping along, seeing no progress, refusing to change my ways.
Not realising what was preventing my going forward,
Not knowing what to do, where to go, how to go, so just keeping safe (?) in the old routines.
Perhaps puzzled by the world's illogicality,
Not prepared or even too scared, to challenge, or to follow a different way,
That is already waiting:
Not realising that sometimes the only way forward is to stop.............
Think. Repent. Be brave enough and wise enough, to do something differently.
The bumble bee had been trying too hard. Ultimately, by itself, it could do nothing.*
If only it knew that help was at hand.
If only I knew.

Jesus said "Repent: for the kingdom of heaven is at hand."

Stop fighting! Yield the mortal self, the arrogance of self-will and selfish pride!
The blind and stubborn mortal personality, shouting to exist, must go and be no more.
Right where I am, the door to the kingdom is already open, but in the other direction!
Love is here, always here, omnipotent hands outstretched in tenderness and healing.
Be still... Trust.... Yield..... Let...... Now!
Know and feel that I am, and simply be, God's child.**
For when I knew it not, Love had already taken me up,
Already knew and knows my freedom.

Even in the depths of despair, we can, in sweet self-surrender, suddenly find,
In Love's care and protection, we are already in the heavenly kingdom.
Because Love loves and liberates, releases from all shackles,
We have the absolute freedom of spiritual being:
Wonderfully, gloriously, free.
If only we would turn:
Humble,
Be.

©Ken Cooper2016
Posted by PrayerfulLiving.com at 1:18 PM No comments:

Enjoy reading and contributing content.
New material is being added regularly, so check back often. We invite you to submit your articles, pearls of inspiration, poetry and testimonies. Click on the "Submission Guidelines" below for instructions on contributing content to this site.